My baby - at least for another 3 weeks

January 31, 2010
Liam is almost 1 and has finally learned to clap!!! I have been trying to teach him how to do this for the last several months, but he would just look at me and smile. Recently we were hit with another snow storm, this time we got about 8-10 inches (this has been my least favorite winter so far living here). The storm came Thursday while I was working and I ended up having to stay the night at the hospital. I had prepared well and packed a bag knowing the storm was coming and I had to work Friday too. So during my 2 day stay at the hospital is when Liam finally decided to share his talent...along with Adley loosing another tooth (geez, I missed everything). I couldn't believe he picked that day to finally share with everyone but ME what I had been trying to teach him. I was excited but totally bummed at the same time because I had missed it. When I got home last night he wouldn't clap for me either, bummed again.......but today he has been clapping for me all day - see video below.


Over the last 2 months we have been transitioning Liam to 'real' food. He loves it, but he certainly makes a much bigger mess! Here he is at lunch time with some puffs and a fruit bar. He ended up needing a bath after this because he decided the fruit bar was a nice moisturizer for his hair. 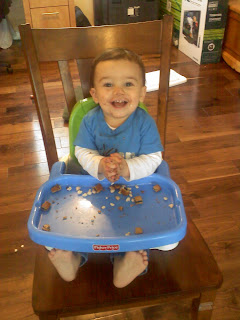 We have know idea how much Liam weighs now (he has his 1yr checkup soon), but he has 8 teeth - 4 on the top and 4 on the bottom. He is super ticklish, loves to smile and is really really fast crawling. He can walk with some assistance behind his walker. He doesn't really say much except 'ba' or 'ooh', why would he though he has plenty of other people around him to talk for him. I have been working on 'mama' with him forever and with my luck he will say it when I am at work. He finally started sleeping through the night at about 10mos of age - thank goodness!!! He is really wiggly especially when getting his diaper changed - seriously sometimes it takes me, Jared and one of the other kids to hold him down or distract him to get the job done. His favorite thing over the last few months - to climb the stairs (not my favorite thing) so the gate is up which is a pain, but if it keeps him from falling its worth it.
Well that's it for now, another update to follow on Liam when he turns 1!!! 1 can you believe it - I can't!

Popular posts from this blog 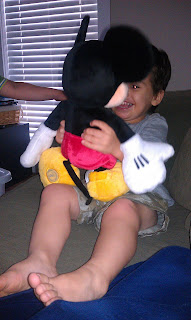 Mickey is a very loved mouse in our house. Liam absolutely can't get enough of Mickey Mouse Clubhouse on Disney. When he wakes up in the morning he comes straight to my room, snuggles in between Jared and I and turns on the tv for his cartoon. He sits there with his arms behind his head and legs outstretched. He is so darn cute.

So the other day I decided to buy him a stuffed Mickey. He was so surprised and loved it.


Checking him out. Mickey now has his own corner in Liam's crib. He likes his 'pets' in specific places.

Also, guess who is potty training????

The only kiddo I have left in diapers - woot woot!!! He has started this all on his own and so I'm optimistically hoping for December to be down to pull ups at night. Liam won't speak to tell us he has to go he just pats himself and points to the bathroom - whatever works right!

And here is our very first tomato from our tiny 1 plant garden.......
We have a few more and hope they will ripen soon. We p…
Read more 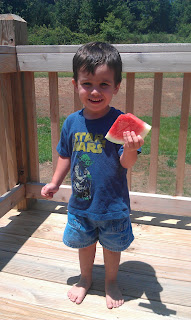 Man do I love this little boy! He is full of squeals, smiles, slobbers, hugs, crumbs and dirt. He is at such a fun age. Liam says a lot through the faces he makes because he is quite stubborn and shy and still not wanting to talk much. He says a hand full of words, shakes his head yes and no and is starting to make different sounds. He is making progress so I am not too worried anymore. And if you haven't heard or noticed....no more pacifier....Yay! Liam is growing up so fast but is still my most snugly baby. He loves to rock in the chair before nap and bed and when he gets up in the morning he often times runs to my room to crawl in bed with me for more snuggles. I just love it! Up next, to turn his crib into a toddler bed....then all signs of 'babyness' will be gone, ah so sad!
Liam learned how to climb anything recently, kind of scary! This was a search for his paci back in March. The boy would do anything for that darn pacifier, but surprisingly it was prett…
Read more 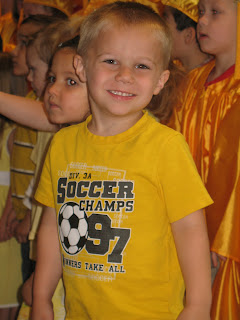 Eli finished his first year of preschool in May. They have this big program for the 4yr old kids and the 3yr old class gets to participate as well. Eli loves school. He asks me everyday if he gets to go to school tomorrow. He only goes 2 times a week. I hope his love for school doesn't wear off like it has for Aidan. I think it's because Aidan is bored. I wish his teacher could see that and challenge him more. Maybe in 3rd grade it will be different. Did I just say 3rd grade - time sure does fly and I'm certainly not getting any younger. Anyway, back to Eli. He did a great job in his program. He yawned a lot, poor kid we were at Dollywood the day before and didn't get home until late. But he did flash a few good smiles...

Eli with Miss Linda - he loves her and we do too!

Eli being silly at a store on Main Street.

Also while my parents were here we went to Discovery Place in Charlotte. It was so much fun. We also saw the IMAX while there called "Born t…
Read more